This weblog is licensed under a Creative Commons License.
« April 2005 | Main

// When you cannot get good coffee, what do you do?

What do you do if you truly have made a concerted effort to not go to Starbucks or buy your coffee from the grocery store only to come face to face with bad quality coffee from your locally owned coffee houses?

Well, this is the problem faced by the author over at Coffee, Tea or Blog?.

There are a lot of people out there who are apt to think Starbucks quality of a high quality. Is this their fault? Or is it really just the best thing they can get around where they live.

The writer of the blog decided to buy his beans at a local cafe, thinking it would be a great quality. After all, it was fairly pricey. But one whiff of the bag proved it was far from fresh. In Dallas, the closest roaster is more than an hour away. Not an easy drive for a quick cup of coffee.

The fact is, I do know better. But is the average joe just starting to branch out from Folgers going to? I live in Dallas, which is somewhere in the top ten largest metro areas in the country. There are a small handful of roasters around, but none less than about an hour round trip. The average person probably isn’t even going to think about a roaster; they’re going to go to the supermarket, go to a coffee house, and either decide that “good coffee” is a myth, or that it equals Starbucks.

As the solution, the author goes to the local Costco, where they roast beans fresh on a constant basis. Granted, the origin of the beans may be questionable, but at least the coffee is freshly roasted. An improvement even over Starbucks. But still a sad improvement overall. It's a shame that the local Dallas coffee houses don't make the effort to import really fresh beans. Or to roast them on their own.

This makes me glad to live in Vancouver where we have such amazing cafes, roasters and dedicated coffee lovers who ensure they sell only the best they can get. Thanks to people at Take 5, Elysian Room, JJ Bean and Trees, I never have to go to Starbucks again.

// What was Puck thinking? Self-heating lattes?!

Wolfgang Puck has announced a new line of self-heating lattes. Shame on him! He should know better! 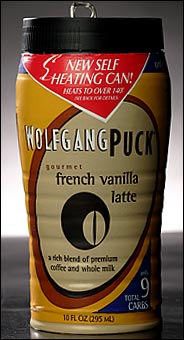 The coffee will come in 4 flavours under the Puck brand. Others will be released by the developer of the can.

The new self-heating can took a company called OnTech 7 years to develop - not to mention the $24 million price tag. They intend to make back the profit by tapping into a small percentage of a huge coffee market - aiming at those who don't want to go out for coffee but are also too busy/lazy to make it themselves.

The cans start to heat when a buttom on the bottom is pressed. Water goes into the inner cone area that is filled with quicklime. The chemical reaction heats the coffee to 145 degrees. In order to hold all this lovely technology, the can is made to weigh 1 lb 2oz - for 10oz of coffee. Try lugging that in your car.

How does taste sum up? Bad, so far. The panel of staff members thought it was warm (the purpose of the can), but that the coffee was sweet and tasted like chemicals. Mmm. Chemicals. Ingredients include sucralose, acesulfame, potassium (salt!?!) and "natural" flavours.

The newspiece identifies the need for this type of beverage because people eat more often in their cars now. Safety aside, that is a valid argument. However it should not mean you need to drink crap. And, this statement is interesting:

"I'm not trying to replace your dinner, but when you're on your way to work and you need some oatmeal and you can't get to the microwave, we will be there for you," said Jonathan Weisz, the OnTech chief executive. "This is going to be a huge, huge part of society in the United States. In two years everyone will be drinking from self-heating containers."

So, to sum up, do you really want a reheated coffee or latte of any sort that has been sitting in a can for who knows how long after it took who know how long to get it to the can after roasting from beans of some undetermined and likely non fair trade origin?

If you say yes, you're on the wrong blog!

This news comes via the New York Times.

// Podcast: The First Home Roast of the Spring

From First Crack comes a podcast of Garrick's first home roast of the Spring. Listen to the first crack of the coffee beans and then the sounds they make as they start to cool. You can almost smell it.

// How to Find a Great Coffee House

Great tips from Bloggle on what to look for when you go into a coffee shop. Part 1 advices you to go in and look around, offering a list of things to look for, and walk away if you see them. For example:


Part 2 talks about what should happen after you order a drink, using a cappuccino as an example. I don't want to take some of the steps out of the list, so you should go and read the whole thing.

Badgett's Coffee eJournal links to an article about coffee futures, which I find interesting.

Did you know that coffee was the second most actively traded commodity. After oil. Wow! I would have thought that grains would top coffee.

Brazil, which grows about 43 percent of the world's Arabica, shipped 7.1 percent more of the milder-tasting beans than a year earlier, an exporter group said. Forecasts of a smaller harvest sent Arabica futures up 68 percent to a six-year high on the Tokyo Grain Exchange the past six months.

The content originally appeared on Bloomberg on May 6. According to the article, Arabica is popular with Starbucks. It is expected that supply may not meet demand this year - the worry stems from weather concerns in Brazil. What does this mean? Higher prices. The last time a crop failed in Brazil, prices went up 36%. Fun stuff.

I've previously seen a televised news piece about an artist couple who paint with coffee - about their experience in finding the right coffees and brewing methods to create hues and everything - they used coffee for a watercolour method, I believe.

Here is another interesting piece onf LJWorld.com about an artist, Chanisa Arthachinda, who uses very strong espresso to paint her canvas. She makes it very thick, like oil, to resemble an oil medium.

Chanisa uses one colour, brown, in its very hues as a calming method that mimics her interest in meditaion.

Link via The Blog of a Coffee Addict.

The Morning Coffee & Afternoon Tea blog brings us this cool little roadside attraction. The tea and coffee pots are from Iowa. Apparently, there are plenty of these across the US, the eldest created in 1860. 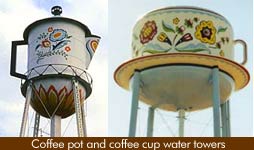 The post notes that not all of these roadside attractions actually point to coffee shops. What a tease!

From Dave Graham of INeedCoffee.com

A poem about coffee! So good!

A little while ago Alistair from the Elysian room left a comment recommending the Zassenhaus grinders, I was looking for a good affordable grinder so the timing was perfect. I did some research online and found good opinions of the Zassenhaus so yesterday I decided to go take a look at them. I ended up buying this one: 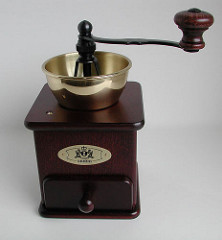 As you can see, it is a beautiful manual coffee grinder. I've only used it twice, I'm actually drinking a cup as I write this. I didn't have a grinder before so I was stuck with drinking stale coffee at home, so being able to drink a cup made with freshly ground coffee makes a world of difference. It tastes so much better.

We're up late tonight playing blog catch up time. So, we brewed a nice French Press full of freshly ground coffee to keep us up.

Except, this is a new thing for us. We bought a new grinder! We'll blog on it tomorrow with a picture.

First result - tastes fabulous! Really good. As we were told today, grinding your own coffee can make all the difference between good coffee and bad. And I concur.

I am highly doubting this personal espresso machine is good, but it is pretty sexy nonetheless. 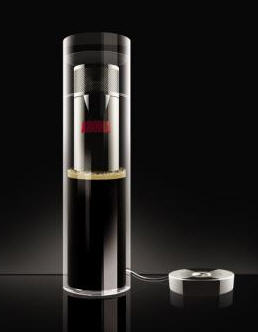 The inspiration for the aesthetically arresting Aroma Espresso Maker came from the sensual aspects of coffee itself. Coffee is a rich aromatic liquid, with similar qualities to a cologne, hence the design aimed to capture the essence of those qualities by being reminiscent of a cologne bottle...

Its transparent casing allows the user to witness coffee being brewed enhancing the sensual experience and to finish it all off, there’s also a cylindrical leather carry bag with a zipper top to protect the coffee machine while traveling...

Functionally, the coffee machines is an innovative adaptation of the traditional Moka/Espresso pots commonly used by Italians as the preferred way to make espresso style coffee at home. Traditionally, once placed on a stovetop, the water in a bottom pressure vessel would boil causing steam pressure to force hot water through a coffee basket. This brews the coffee which pours out a top spout and into a top chamber. The AROMA Espresso Maker uses the same principles but has cleverly re-arranged the pressure and coffee chambers to make the design compact and allow the user to witness the brewing process.[Gizmag]

You can read more about this machine from Gizmag.

So, think coffee is out of the question while camping? Well, luckily one of our friends did not.

Although we did consider bringing our French Press out to the site, we decided not since it was so new. However, our very organized friend did. This is the friend who also thinks to bring plastic martini glasses. Anyway, we were able to enjoy a morning cup of coffee even while at Golden Ears!